“Off With His Head!” 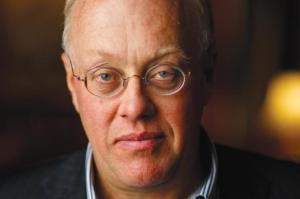 You know who’s in control by who you can’t criticize. Chris Hedges learned that – the hard way – last week when his invitation to speak at a peace conference at U Penn was unceremoniously revoked:

“We’re sorry to inform you that we don’t think that Chris Hedges would be a suitable fit for our upcoming peace conference. We’re saying this in light of a recent article he’s written in which he compares the organization ISIS to Israel (here’s the article in question). In light of this comparison we don’t believe he would be suitable to a co-existence speaker based on this stance he’s taken.”

What did he say that was so bad? Here’s a portion of Hedges’s December 15th piece titled “ISIS–the new Israel”:

Its quest for an ethnically pure Sunni state mirrors the quest for a Jewish state eventually carved out of Palestine in 1948. Its tactics are much like those of the Jewish guerrillas who used violence, terrorism, foreign fighters, clandestine arms shipments and foreign money, along with horrific ethnic cleansing and the massacre of hundreds of Arab civilians, to create Israel. Antagonistic ISIS and Israeli states, infected by religious fundamentalism, would be irreconcilable neighbors. This is a recipe for apocalyptic warfare. We provided the ingredients.

Sounds pretty accurate to me. Looks like he struck a nerve.

Perhaps he came too close to the truth. For after all, if it walks like a duck and quacks like a duck, it may very well be a duck.

Maybe what U Penn is really afraid of is that if people start likening ISIS to Israel, they may start questioning whether ISIS is Israel.

Leave a Reply to Rasha B. Foda Cancel reply