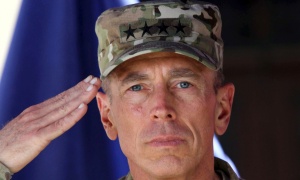 The US justice department is reported to be weighing up criminal charges against David Petraeus stemming from an investigation of whether the former CIA director gave a lover access to classified information.

There must be something else going on here, but it’s impossible to know what. It is extraordinary that someone this high ranking would remain under investigation for so long.

A recommendation to prosecute would leave the US attorney general, Eric Holder, with a decision to make on whether to seek an indictment against Petraeus, one of the leading US military commanders in recent times, having served as commander of American forces in both Iraq and Afghanistan.

The Times reported that Petraeus had indicated to the justice department he was not interested in a plea deal that would enable him to avoid a trial. Petraeus has said he did not provide classified information to Broadwell.

Wow. That’s a major stand off. Petraeus is no lightweight, having managed two major contrived wars and headed the CIA.

Senator John McCain of Arizona, a leading Republican voice on national security issues and an ally of Petraeus, in December sent a letter to Holder expressing concern about the justice department’s handling of the investigation.

“I cannot ignore the broader concerns raised by the fact that this investigation apparently remains unresolved nearly two years later and that the only information that has come to light is through leaks by unnamed sources within the US intelligence community with knowledge of the matter,” McCain wrote.

A trial on something like this seems almost inconceivable. Reminds me of A Few Good Men. It will never happen. At least, I don’t think so.