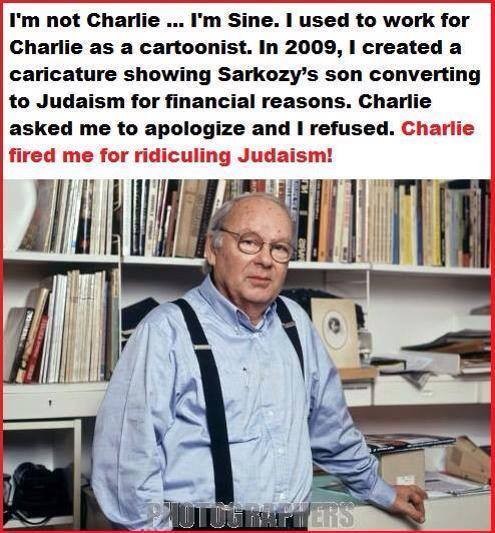 While the world was busy condemning the January 7th attack on the satirical magazine, Charlie Hebdo, a little known incident from the magazine’s past went largely unnoticed:

80-year-old Maurice Sinet, political cartoonist with Charlie Hebdo for 20 years, was fired in 2009 for his anti-Semitic cartoons mocking the relationship of former French President Sarkozy’s son with a wealthy Jewish woman.

Maurice Sinet, known to the world as Siné, faced charges of “inciting racial hatred” for a column he wrote in July 2009. “L’affaire Sine,” followed the engagement of Jean Sarkozy to Jessica Sebaoun-Darty, the Jewish heiress of a major consumer electronics company, the Darty Group. Commenting on rumours that Jean intended to convert from Catholicism to Judaism (Jessica’s religion) for social success, Siné quipped, “He’ll go a long way in life, that little lad.”

It didn’t take long for Claude Askolovitch, a high-profile political journalist, to accuse Siné of anti-Semitism. Charlie Hebdo‘s editor, Philippe Val, who re-published Jyllands-Posten’s controversial cartoons of the prophet Mohammed in the name of ‘freedom of press’ in 2006, agreed that the piece was offensive and asked Siné to apologize. Siné refused, saying, “I’d rather cut my balls off.” He was fired and taken to court by the Ligue Internationale Contre le Racisme et l’Antisémitisme (LICRA), an organization which works to promote racial tolerance. In December 2010, Siné won a €40,000 court judgment against his former publisher for wrongful termination.

Well, at least he got something for his trouble. But it’s not much for a man who dedicated 20 years of his life to a magazine that touts itself as the fearless bastion of free speech in France, only to be kicked to the curb for criticizing the ruling class.

But, that’s the last you’ll hear from me on “Je Suis Charlie,” which rather than echo the fight for free speech that it’s meant to be, has turned into an emblem of fascist propaganda and hypocrisy.