Currency Carnage: Why did the Swiss Pull the Peg? 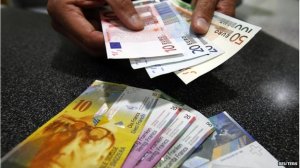 As usual. Dr. Paul Craig Roberts, former assistant secretary of the US treasury, provides crucial (and scathing) analysis of both US government policies and recent events in FOREX markets. He offers this simple explanation for why the Swiss central bank removed the currency peg they initiated on their franc only three years ago, leaving behind a landscape littered with currency carnage:

The answer is that the EU attorney general ruled that it was permissible for the EU central bank to initiate Quantitative Easing–that is, the printing of new euros–in order to bail out the mistakes of the private bankers. This decision means that Switzerland expects to be confronted with massive flight from the euro and that the Swiss central bank is unwilling to print enough new Swiss francs to maintain the peg. The Swiss central bank believes that it would have to run the printing press so hard that the basis of the Swiss money supply would explode, far exceeding the GDP of Switzerland.

The money printing policy of the US, Japan, and apparently now the EU has forced other countries to inflate their own currencies in order to prevent the rise in the exchange value of their currencies that would curtail their ability to export and earn foreign currencies with which to pay for their imports. Thus Washington has forced the world into printing money.

The Swiss have backed out of this system. Will others follow, or will the rest of the world follow the Russians and Chinese governments into new monetary arrangements and simply turn their backs on the corrupt and irredeemable West?

Most likely, a combination of both. Which means that Dr. Roberts is spot on in his predictions for an unsuspecting US population:

Americans need to understand that the only thing exceptional about the US is the ignorance of the population and the stupidity of the government.

What other country would let a handful of Wall Street crooks control its economic and foreign policy, run its central bank and Treasury, and subordinate citizens’ interests to the interests of the one percent’s pocketbook?

A population this insouciant is at the total mercy of Russia and China.

The level of corruption and manipulation that characterizes US economic and foreign policy today was impossible in earlier times when Washington’s ambition was constrained by the Soviet Union. The greed for hegemonic power has made Washington the most corrupt government on earth.

The consequence of this corruption is ruin.

Not pretty, to say the least. If Americans don’t work together to reign in their out of control government, they can kiss their stability and their assets goodbye.