Too True to be Good: Australian Press condemns Anti-Israel Cartoon 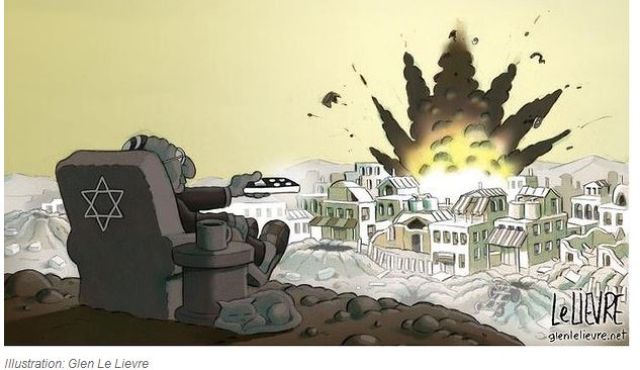 “in a time of universal deceit, telling the truth becomes a revolutionary act.” — George Orwell

It didn’t take long after the hypocritical parades in Paris for some people to get back to business as usual – dictating to others what can and can’t be said:

An Australian press organization has judged that a cartoon published in The Sydney Morning Herald violated press Standards of Practice by the way it linked symbols of the Jewish faith to criticism of Israel.

The adjudication, issued by the Australian Press Council, concerned a cartoon drawn by Glen Le Lievre and published by the Morning Herald on July 26, in the midst of the most recent Gaza conflict. The cartoon depicted an elderly man with a sizable nose wearing glasses and a yarmulke, reclining in a chair emblazoned with a Star of David, and holding a remote control while watching from hilltop as a city, which by implication is Gaza, explodes.

Le Lievre is an internationally published cartoonist whose work has appeared in publications including The New Yorker, Reader’s Digest, and Mad Magazine.

In the adjudication issued January 17, the Press Council states, “A linkage with Israeli nationality might have been justifiable in the public interest, despite being likely to cause offense. But the same cannot be said of the implied linkage with the Jewish faith that arose from inclusion of the kippah and the Star of David.”

Nevermind that Israel has the Jewish star of David emblazoned on its flag and incessantly declares itself the world’s Jewish homeland. What matters is political correctness. They can call themselves Jewish, but if you call them Jewish you’re a goddamn anti-semite.

In response to the adjudication, the Morning Herald republished an apology that it originally published on August 3, 2014, one week after the cartoon originally ran. That apology likewise regretted the use of the religious symbols of the yarmulke and Star of David, although it noted that Le Lievre’s work commonly depicts people with large noses, regardless of race or ethnicity, and that the image was inspired by news photographs of Israelis watching the bombardment of Gaza from the hilltops of Sderot.

The Press Council’s statement praised the apology and noted that the Morning Herald’s editor in chief and news director had attended “seminars facilitated by the Jewish Board of Deputies to raise awareness about imagery that could be construed as anti-Semitic.”

You see, when you wield immense economic power, it’s quite easy to control others. You don’t need to brandish a sword over their heads.