Probably, the biggest on earth; most certainly the one with the highest profile. And just like a favorite son of someone very, very powerful, Bibi seems determined to prove that he can do just about anything he wants.

But his latest petulant misstep in inviting himself to address the US congress, without giving notice to the president, has really earned him his stripes and brought a barrage of condemnation on his head, from all corners of the internet. Bibi the brat has finally outdone himself. This may very well be the straw that breaks Bibi’s back: 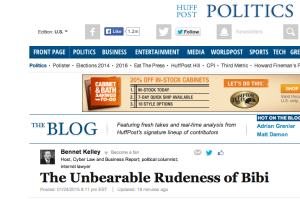 “Time and time again, Netanyahu has shown little respect for American Presidents, its institutions or interests despite the fact that we provide Israel with over $3 billion in aid annually, use our diplomatic capital to block anti-Israeli measures at the United Nations and have had to endure a devastating oil embargo and terrorist attacks at home and abroad because of our support for Israel.” — Bennet Kelley, The Unbearable Rudeness of Bibi

The article reads like a laundry list of embarrassments and insults that Bibi has inflicted on America despite the astonishing, inexplicable, and unjustifiable support the US provides Israel.

For Netanyahu to disrespect the United States just after Secretary of State Kerry had called nearly 50 head of state to head off action against Israel at the United Nations is astounding.  Waterboys are treated with more respect than that.

And that’s in addition to what White House sources said: 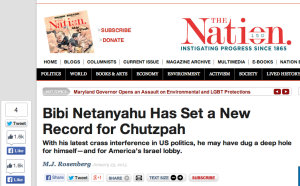 On Thursday night, Haaretz reported that the administration has finally had it with Netanyahu.

“We thought we’ve seen everything,” a senior American official said. “But Bibi managed to surprise even us. There are things you simply don’t do. He spat in our face publicly and that’s no way to behave. Netanyahu ought to remember that President Obama has a year and a half left to his presidency, and that there will be a price.”

This isn’t the first time that Bibi has gone too far, at one point he was barred from the state department for his insolence.

“I barred him from the State Department,” Baker told CNN on Sunday. “That may not be widely known.”

Baker explained that he had made the decision after Netanyahu said that “American policy in the Middle East is based on lies and distortions” during the George H.W. Bush administration.

Indeed the list of Bibi et al’s insults to the Obama administration is long and often outrageous. These are only a few that demonstrate that, despite unprecedented allegiance from the US, Israel does not consider the US an ally:

1. During an official visit to the White House in May 2011, Prime Minister Netanyahu lectures President Obama during comments to the press after a meeting in the Oval Office[.]

2. In response to a U.S. ceasefire proposal to end Israel’s assault on Gaza in July 2014, senior Israeli officials accuse Secretary of State John Kerry of carrying out a “strategic terrorist attack” against Israel.

3. In January 2014, Israeli Defense Minister Moshe Yaalon accuses Secretary of State Kerry of being motivated by a “misplaced obsession and messianic fervor” in his push for peace between Israelis and Palestinians, adding that Kerry “cannot teach me anything about the conflict with the Palestinians.” According to other media reports, Yaalon had been badmouthing Kerry to reporters and diplomats for weeks.

4. In October 2014, following criticism from the White House over settlement construction in occupied East Jerusalem, Prime Minister Netanyahu tells an American interviewer that such criticism goes “against American values.”

5. In February 2014, . . . [Yariv] Levin, chairman of Israel’s coalition government and a member of Prime Minister Netanyahu’s Likud party, tells Shapiro that the U.S. should support Israel unconditionally, stating: “We see our alliance with you as unconditional. When there is a true alliance, it is proved by you standing behind us, even when you think we’re wrong,” while Deputy Speaker of the Knesset Moshe Feiglin, also from Netanyahu’s Likud party, claims that the refusal of the Obama administration to release Jonathan Pollard, a U.S citizen sentenced to life in prison in 1986 for spying for Israel, “reeked of anti-Semitism.”

6. In February 2014, following warnings from Secretary of State Kerry that Israel is becoming isolated internationally and vulnerable to the global Boycott, Divestment and Sanctions (BDS) movement, Deputy Minister of Transportation Tzipi Hotovely, from Netanyahu’s Likud party, blasts Kerry, claiming his “unprecedented threats of a boycott are an attempt to terrorize Israel.”

Yep, something is wrong with Bibi and gang, but it’s not clear where or if it will end. If it’s any consolation to Obama, Bibi treats everyone like this.

He even dissed the French President two weeks ago by pushing himself to the front of a parade the President expressly asked him not to attend. Really, it would be comic if none of these countless snubs included killing thousands upon thousands of innocent Palestinians over repeated well planned military incursions over the last 10 years.

By now, the whole world knows that Bibi is not just rude, he’s a belligerent brat of the highest order, and heavily armed. You would think that, by now, someone with cajones would put him in his place. Ironically, with Israeli elections just around the corner, that someone might just be the Israelis who gave birth to him.