Genocide, Iran, and the brat who cried wolf 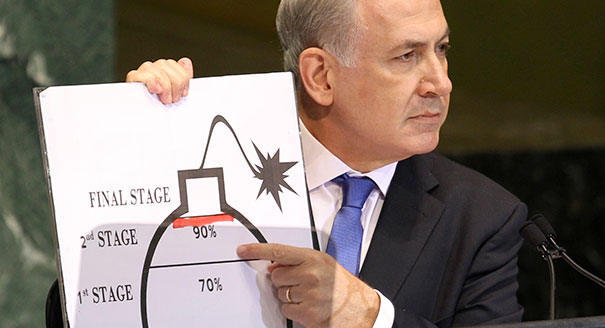 Everyone has heard the parable of the boy who cried wolf. Yet, that hasn’t stopped Bibi and others like him from routinely making charges of anti-semitism where none exists. Now, Bibi the brat has taken it a step further with the outrageous claim that Iran is planning a genocide against “the one and only Jewish state.” Nevermind that Iran is home to 25,000 Jews who have lived there in peace for 3000 years and are determined to stay no matter what Bibi et al say.

Although Iran and Israel are bitter enemies, few know that Iran is home to the largest number of Jews anywhere in the Middle East outside Israel.

About 25,000 Jews live in Iran and most are determined to remain no matter what the pressures – as proud of their Iranian culture as of their Jewish roots.

It is dawn in the Yusufabad synagogue in Tehran and Iranian Jews bring out the Torah and read the ancient text before making their way to work.

It is not a sight you would expect in a revolutionary Islamic state, but there are synagogues dotted all over Iran where Jews discreetly practise their religion. “Because of our long history here we are tolerated,” says Jewish community leader Unees Hammami, who organised the prayers.

He says the father of Iran’s revolution, Imam Khomeini, recognised Jews as a religious minority that should be protected.

As a result Jews have one representative in the Iranian parliament. “Imam Khomeini made a distinction between Jews and Zionists and he supported us,” says Mr Hammami.

In the Yusufabad synagogue the announcements are made in Persian – most Iranian Jews don’t really speak Hebrew well.

Jews have lived in Persia for nearly 3,000 years – the descendants of slaves from Babylon saved by Cyrus the Great.

Over the centuries there have been sporadic purges, pogroms and forced conversions to Islam as well as periods of peaceful co-existence.

These days anti-Jewish feeling is periodically stirred by the media. Mr Hammami says state-run television confuses Zionism and Judaism so that “ordinary people may think that whatever the Israelis do is supported by all Jews”.

The paper falsely said the synagogues were in Iran – even describing one as the Yusufabad synagogue in Tehran and locating another in Shiraz.

“This provoked a number of opportunists in Shiraz,” explains Iran’s Jewish MP, Maurice Mohtamed, “and there was an assault on two synagogues.”

Mr Mohtamed says the incident was defused by the Iranian security forces, who explained to people that the news was not true.

And with the coming to power of an ultra-conservative like President Mahmoud Ahmadinejad, there has been increased concern internationally about the fate of Iranian Jews.

Mr Ahmedinejad has repeatedly used rabid anti-Israeli rhetoric – slogans like “wipe Israel off the map” – and most controversially he has questioned the number killed in the Holocaust during World War II.

Mr Mohtamed has been outspoken in his condemnation of the president’s views – in itself a sign that there is some space for Jews in Iran to express themselves.

“It’s very regrettable to see a horrible tragedy so far reaching as the Holocaust being denied … it was a very big insult to Jews all around the world,” says Mr Mohtamed, who has also strongly condemned the exhibition of cartoons about the Holocaust organised by an Iranian newspaper owned by the Tehran municipality.

Despite the offence Mahmoud Ahmedinejad has caused to Jews around the world, his office recently donated money for Tehran’s Jewish hospital.

It is one of only four Jewish charity hospitals worldwide and is funded with money from the Jewish diaspora – something remarkable in Iran where even local aid organisations have difficulty receiving funds from abroad for fear of being accused of being foreign agents.

Most of the patients and staff are Muslim these days, but director Ciamak Morsathegh is Jewish.

Israeli family ties But there are legal problems for Jews in Iran – if one member of a Jewish family converts to Islam he can inherit all the family’s property.

Jews cannot become army officers and the headmasters of the Jewish schools in Tehran are all Muslim, though there is no law that says this should be so.

But their greatest vulnerability is their links to Israel – where many Jews have relatives.

Seven years ago a group of Jews in the southern city of Shiraz was accused of spying for Israel – eventually they were all released. But today many Iranian Jews travel to and from Iran’s enemy Israel.

In one of Tehran’s six remaining kosher butcher’s shops, everyone has relatives in Israel. In between chopping up meat, butcher Hersel Gabriel tells me how he expected problems when he came back from Israel, but in fact the immigration officer didn’t say anything to him.

“Whatever they say abroad is lies – we are comfortable in Iran – if you’re not political and don’t bother them then they won’t bother you,” he explains.

His customer, middle-aged housewife Giti agrees, saying she can easily talk to her two sons in Tel Aviv on the telephone and visit them.

“It’s not a problem coming and going; I went to Israel once through Turkey and once through Cyprus and it was not problem at all,” she says.

Gone are the early days of the Iranian revolution when Jews – and many Muslims – found it hard to get passports to travel abroad.

“In the last five years the government has allowed Iranian Jews to go to Israel freely, meet their families and when they come back they face no problems,” says Mr Mohtamed.

He says there is also a way for Iranian Jews who emigrated to Israel decades ago to return to Iran and see their families.

“They can now go to the Iranian consul general in Istanbul and get Iranian identity documents and freely come to Iran,” he says.

The exodus of Jews from Iran seems to have slowed down – the first wave was in the 1950s and the second was in the wake of the Iranian Revolution.

Those Jews who remain in Iran seem to have made a conscious decision to stay put. “We are Iranian and we have been living in Iran for more than 3,000 years,” says the Jewish hospital director Ciamak Morsathegh.

“I am not going to leave – I will stay in Iran under any conditions,” he declares.

There is, of course, a moral to this story.

If you want to be taken seriously, save accusations of anti-semitism for those who are really guilty of it, or risk being abandoned when faced with the Real McCoy.