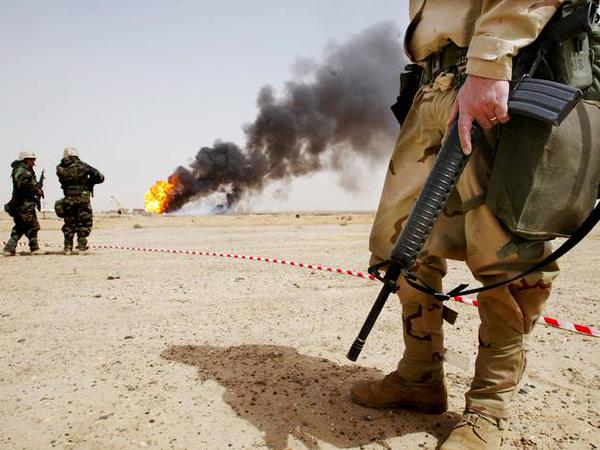 Of course, this is nothing new to anyone with half a brain, who’s paying attention and isn’t being paid to close their eyes or lie. But now those who like to make believe they rely on sources more substantial than hunches and internet conspiracy theories, have a good old fashioned research study they can sink their teeth into:

Foreign governments are 100 times more likely to intervene in civil wars if the troubled state is home to hydrocarbon reserves, according to a new report by academics from the universities of Warwick, Portsmouth and Essex.

One of the report’s authors, Dr. Petros Sekeris of the University of Portsmouth, told the Independent he and his colleagues had uncovered “clear evidence that countries with potential for oil production are more likely to be targeted by foreign intervention if civil wars erupt.”

“Military intervention is expensive and risky. No country joins another country’s civil war without balancing the cost against their own strategic interests,” he added.

The report, published in the Journal of Conflict Resolution, examined 69 civil wars between 1945 and 1999. It said civil wars amount to 90 percent of all militarized conflicts since the close of World War II, and almost 67 percent of these have been characterized by foreign intervention.

The research frames oil as a dominant motivating factor in conflicts, and argues hydrocarbons heavily influenced the West’s military intervention in Libya. It also suggests oil plays a noteworthy factor in the US-lead war against Islamic State (IS, formerly ISIS/ISIL).

Dr. Vincenzo Bove, of the University of Warwick, said IS militants received little attention from Western media outlets until they began to encroach upon the oil-rich Kurdish region of northern Iraq.

“But once ISIS got near oil fields, the siege of Kobani in Syria became a headline and the US sent drones to strike ISIS targets,” Bove told the Independent.

Had they bothered to dig a little deeper, they might have found that civil wars are specifically fomented as pretexts for military intervention, which is why many independent online researchers think the West is behind ISIS. While the report didn’t go quite that far, they came to a number of obvious conclusions along with some questionable ones.

The report found that foreign governments’ decision to intervene was largely dominated by their desire to control oil supplies in conflict-ridden states, while historical, geographic and cultural/ethnic ties were far less important.

The researchers noted that America maintains a military presence in Gulf states that produce oil, and has a long history of backing despotic regimes despite the US administration’s supposed agenda of democratization.

But they argued a recent rise in US oil production indicates the state will intervene less in the near future.

Additionally, they suggest the world can expect a cycle of low intervention in years to come because plunging oil prices make it a less valuable resource to protect.

It’s not clear what evidence they used to support their predictions for the future, but it seems unlikely that the US intends to decrease their military interventions across the globe. As the authors of the report quite correctly concluded, it’s not just about oil, though oil is a major factor.

Traditionally, war and foreign intervention are thought to be driven by a complex cocktail of factors. Such factors are widely accepted to be propelled by governments’ pursuits of strategic interests, which generally benefit elite members of their societies.

The desire to control valuable resources, the desire to dominate key geographic territories, the strengthening of a lucrative military industrial complex, the desire to intimidate enemy states and the extension of financial deregulation across the globe are often cited as key factors.

Now THAT is the whole truth and nothing but the truth. But they almost left out the most important cause of war:

Experts suggest the most significant motivations for wars are generally the least discussed, while peripheral or false motivations are often circulated with gusto.

No matter what the real reason is behind them, all wars are waged over lies.