Syriza – Against All Odds 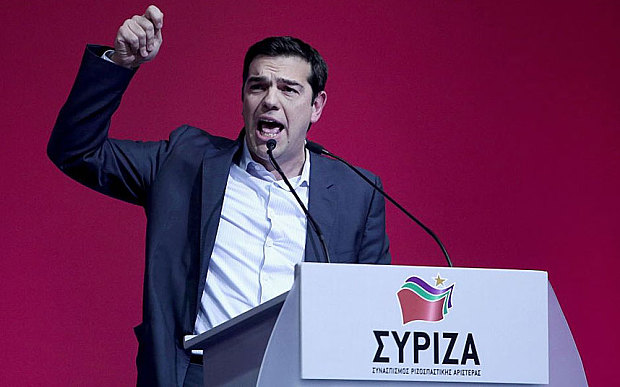 The new Greek government is struggling against all odds to hold on to the euro. But idealists who find themselves swimming in shark infested waters, with nothing but a rubber dingy and a paddle, are not likely to come out alive. Yet they continue to try in what is turning into an epic battle between the global lords of finance and a proud people struggling to survive.

”DO YOU WANT ME TO BETRAY MY COUNTRY AND MY PEOPLE? MY ANSWER IS NO”

“We will not take one step back, we do not tolerate threats. In the Europe we envision there are no tenants and landlords”.

“When you are in the right, you don’t back down, whatever the consequences, however powerful those wishing to treat you unjustly are” ~Alexis Tsipras, Greek Prime Minister

Varoufakis is not fairing much better with his counterparts… 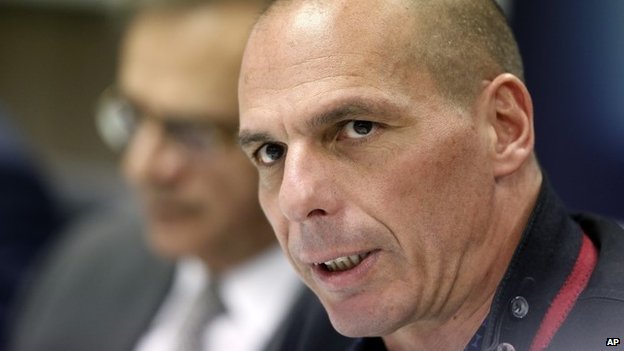 “This morning I had the opportunity, the pleasure, and the joy to outline to Mr Schauble our government’s priorities for a functional agreement in a prosperous European Union,” he said.

“As Mr Schauble said, we didn’t reach an agreement. It was never on the cards. We didn’t even agree to disagree, from where I’m standing.”

On Thursday, the Greek finance minister said his country was labouring under a “seemingly never-ending crisis that begun in Greece and spread out” to other countries in the eurozone.

He said that the conditions of austerity attached to Greece’s 240bn euro (£179bn; $270bn) bailout had been “begetting indignity in my nation for too long”.

But the Germans are unfazed.

Speaking after the meeting, the German minister was quick to rule out a so-called “haircut” of Greece’s debt, which stands at more than €320bn(£240bn;$366bn).

He said that Greece “belonged in the euro” and that Germany had offered to help the country meet its debt conditions by strengthening its tax system.

Others are equally skeptical of Greek proposals.

Greece’s plans to make its debt more manageable by swapping rescue loans for growth-indexed bonds may be deemed illegal under European Union rules, according to a lawyer who worked on the country’s 2012 debt restructuring.

Greece’s creditors will probably object to proposals for such a swap, said Yannis Manuelides, a partner at Allen & Overy, because they cannot accept losses on their loans. That would remain the case even though the creditors would lose less from the swaps than they would from writing down the loans, as Athens originally demanded.

Greece’s new finance minister, Yanis Varoufakis, proposed on Monday that the creditors — euro zone member states and their bailout fund, the EFSF — swap their loans to Greece for debt that only pays interest if the Greek economy grows. His proposal has met a cool reception in Brussels and beyond.

Sounds more like equity than debt. Totally unacceptable to those who see themselves as lords, not brothers.

Searing criticism has already emerged all over European media, but not all appears aimed at crushing the Greek rebellion, but rather throwing some cold water at its face, to make them realize that the only way out is to drop the Euro.

Mr Tsipras’s politics are contemptible, even by the exceptionally low standards of the Greeks. He promises to end austerity, yet also pledges that Greece will stay in the euro. According to Mr Tsipras, a deal can be struck with the European Union that will allow Greece to renegotiate its debts yet again and raise public spending. Such a deal might be possible, but only if he threatens to quit the euro. He will be impotent in any serious negotiations.

Yet he is liked by the Greeks, because he reflects the reckless national mood. After years of economic depression, the country can no longer think straight. To most Greeks, leaving the euro is unthinkable. They think it will mean leaving the European Union itself, and being classified along with Ukraine or Belarus, on the fringes of Europe and at the mercy of the Russians.

On the other hand, staying in the euro, and the economic devastation it brings, is also terrifying. Hence Mr Tsipras, with his easy and shallow promise that the euro can be reconciled with prosperity.

It seems unlikely that the Greeks will save themselves AND hold on to the euro at the same time. They must abandon the Euro to survive.