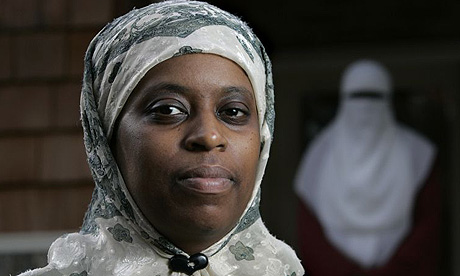 The increasingly rabid persecution of Muslims across America continues unabated.

A city judge in Georgia has in the past eight days barred two Muslim women wearing Islamic headscarves from entering his courtroom, jailing one, and prompting an inquiry from the civil rights office at the US department of justice.

Valentine said she sought to accompany her nephew to a traffic hearing yesterday but was told by a court security officer that she could not enter the courtroom with her headscarf on. She said she refused to remove it and turned to leave, saying, “This is bullshit”.

Security officers handcuffed her and brought her before Rollins, who sentenced her to 10 days in jail when she declined to defend her actions at the security checkpoint, her husband Omar Hall said. Valentine, an insurance underwriter, was forced to take off the scarf and don an orange jumpsuit, chained and put aboard a jail bus with men and women.

“It felt like I was naked, because that’s how I feel without my hijab,” Valentine said. “You could have taken off my clothes and it would have felt the same way.”

Her husband phoned an Islamic civil rights organisation and sought an attorney, and she was released without explanation after about seven hours.

And I thought the Canadian Judge from last week was a clown. It doesn’t get more outrageous or stupid than this. I guess “judge” Rollins has not met the Honorable Ma’isha L. Aziz, chief judge at municipal court in Lawnside, NJ.  I bet he’d get a real kick out of that. One would hope, there goes his career – down the crapper, where it belongs. But, sadly he will probably hold on to his bench, but the same can’t be said for his reputation.