US Chief of Staff: “The Occupation Must End”

“In unusually tough language that underscores the fracture in relations between Washington and Israel, White House Chief of Staff Denis McDonough said “an occupation that has lasted for almost 50 years must end.”
.
McDonough criticized Netanyahu’s pre-election pledge to block the creation of a Palestinian state — the supposed end goal of decades of fruitless peace talks — and he questioned Netanyahu’s efforts to undo the damage.
.
“We cannot simply pretend that those comments were never made, or that they don’t raise questions about the Prime Minister’s commitment to achieving peace through direct negotiations,” he said.

“The Palestinian people must have the right to live in and govern themselves in their own sovereign state,” he added. 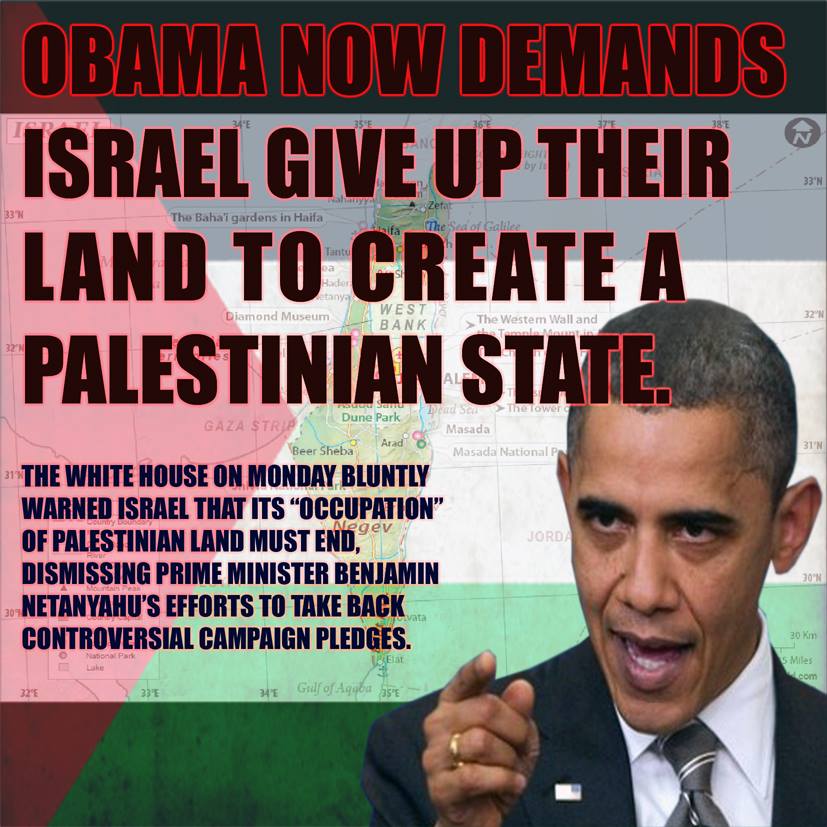 Of course, the people who created this meme did so with the goal of warning Americans that Obama is dangerously close to messing up the end times for them and their gang of zionist zealots, hence the dictatorial type photo op:

And there you have it. We are now nearing the end of the race, and the horses of prophecy are about to round the clubhouse turn. Obama wants Jerusalem for the mythical Palestinian people, and he is going to take it.
The battle in the Middle East has always been about one thing, and will always be about one thing: Who owns Jerusalem?
.
Why is this of such tantamount importance? Because Jerusalem is where Messiah will return to when the Battle of Armageddon, foretold of by Ezekiel the Prophet, is waged in the valley of Megiddo. Jerusalem is where Messiah will establish His 1,000 reign of the whole earth on the Throne of David. Jerusalem is the “apple of God’s eye”, and soon will command the attention of the whole world.

It is almost time for events to begin. The bible tells us who will fight this battle, and more importantly, Who will win the battle.

Are you ready for what comes next?”

If not, better get ready, because the world is in for one heck of a ride, on the road to hell.