Islamophobia, like all phobias, is based not on ignorance but on false beliefs

Reza Aslan provides crucial insight on the source and cause of widespread islamophobia in the US and around the world and the best way to counter it.

That reason is not just ignorance, he says. 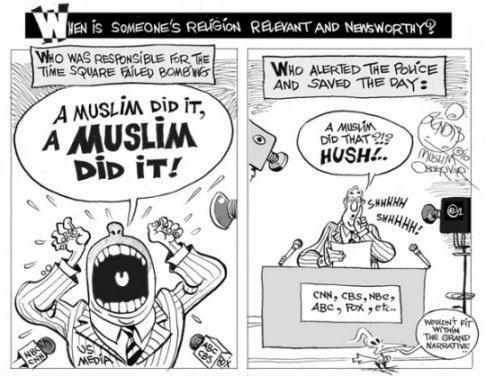 [It] comes down to  consistent and biased anti-Muslim messages that trickle down and become talking points for the media, and politicians during election season. “All of this becomes a self-fulfilling prophecy,” Aslan said.

There is plenty of information about Islam out there and so many ways that people can inform and educate themselves and each other as to the true nature of Islamic practices and beliefs, but very few bother to access this information and those who do are not apt to believe it, because their minds are already made up by a steady and constant barrage of misinformation and rhetoric against Muslims disseminated over decades through the mainstream media.

When you look at the facts, Aslan explained, negative views of Muslims are far from the truth. Poll, after poll, after poll shows Muslims are the least tolerant of violence, have the highest level of education and income among religious groups in the U.S., and are highly assimilated, yet they aren’t portrayed that way.

“Bigotry is not the result of ignorance. I would love to say the answer is education, and knowledge, but that doesn’t work in changing people’s mind,” Aslan said. Though, you can lay out the numbers for Americans, and try to educate folks on the truth about Islam – it doesn’t work, it doesn’t change anyone’s mind. What does? Aslan ended his talk explaining that building relationships is the answer – the key for change.  “When you have a relationship with someone, it’s hard to hate them,” he said. The barrier will be broken through art, stories, relationships, and even sitcoms.

The same dynamics apply to just about every group of people out there, no matter what their beliefs.

That’s why we can’t even think about discussing a program once it’s been labeled “socialist” or “communist.” The conversation is routinely aborted before it even begins because the mainstream media has so effectively placed these ideas off limits. If we really want to take back control of our lives and our country, we must first take back control of our minds. We must cut out the middleman – the mainstream media – by forging direct relationships with our neighbors and our countrymen instead.