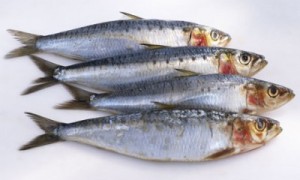 Looks like the irreversible slide into ecological collapse is starting earlier than expected. The following is a compilation of excerpts from various newspapers regarding the emergency ban on sardine fishing across the entire west coast. I don’t usually copy and share the whole thing – but, I think it’s that important…

NY Times, Apr 15, 2015 (emphasis added): [Regulators] approved an emergency closure of commercial sardine fishing off Oregon, Washington and California… Earlier this week, the council shut down the next sardine season… [R]evised estimates of sardine populations… found the fish were declining in numbers faster than earlier believed… [Stocks are] much lower than estimated last year… The reasons are not well-understood.

Pacific Fishery Management Council meeting, April 13, 2015: Ben Enticknap, Oceana senior scientist (1:08:00 in) — “We’ve seen a significant change in recruitment [Recruitment: The number of new young fish that enter a population]. There’s been practically no recruitment in recent years, and this was not expected.”

Undercurrent News, Apr 14, 2015: [A]ccording to the report on the emergency action from the PFMC… “the total stock biomass of Pacific sardine is declining as a result of poor recruitment“… [A California Wetfish Producers Association official said] “little recruitment was observed in 2011-2014.”

Oregonian, Apr 13, 2015: Pacific coast sardines are facing a population collapse so severe[fishing] will be shut down… [The] downward spiral in spite of favorable water conditions has ocean-watchers worried there’s more to this collapse than cyclical population trends. “There are a lot of weird things happening out there, and we’re not quite sure why they aren’t responding the way they should,” said Kevin Hill, a NOAA Fisheries biologist… Fishery managers are adding it to a list of baffling circumstances off the West Coast… NOAA surveys indicate very few juvenile fish made it through their first year. “The population isn’t replacing itself,” Hill said.

SFist, Apr 14, 2015: [T]he population appears decimated… As the Council writes, “temperatures in the Southern California Bight have risen in the past two years, but we haven’t seen an increase in young sardines”… Sardines typically spawn in warmer waters, with cold water decreasing their numbers.

SF Chronicle, Apr 14, 2015: Sardine population collapses… [There’s] evidence stocks are going through the same kind of collapse [seen in the 1950s]… The sardine population along the West Coast has collapsed… Causes of crisis — A lack of spawning… was blamed for the decline… Severedownturn… things recently took a turn for the worse… because of a lack of spawning due to poor ocean conditions in 2014… The collapse this year is the latest in a series of alarming die-offs, sicknesses and population declines in the ocean ecosystem along the West Coast. Anchovies… have also declined [due to] a lack of zooplankton… Record numbers of starving sea lions… Brown pelicans, too, have suffered from mass reproductive failures and are turning up sick and dead… Strange diseases have also been proliferating in the sea…

KPCC, Apr 1, 2015: The first time that sardine fishing has been banned since federal management of the fishery began… Many are worried a… catastrophic crash is happening.