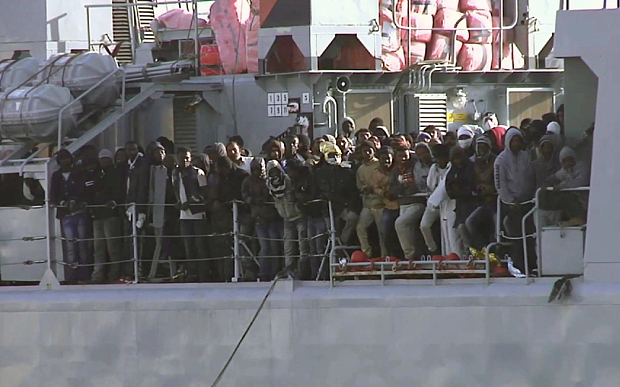 Dan Hodges holds no punches and takes no prisoners in this scathing indictment of the British government’s role in the death of 900 refugees in the Mediterranean.

The piece is getting a lot of well-deserved traction, with thousands of comments and tens of thousands of shares. The world must know the consequences of the West’s contrived wars and their merciless immigration ‘policies.’

There’s something we need to be clear on. The death of 900 refugees – we have to use that blanket term because we don’t know the names of the dead, and I suspect we never will – in the Mediterranean over the weekend was not a “tragedy”. The word tragedy implies an accidental calamity. An unfortunate confluence of space and time.

In October of last year I wrote about how ministers had adopted a new strategy for dealing with the wave of children, women and men fleeing the charnel houses of Syria and Libya. It involved drowning them.

incredibly, Hodges had called this last October, when the policy originally surfaced.

In the House of Lords, Foreign Office minister Lady Anelay announced: “We do not support planned search and rescue operations in the Mediterranean”. The reason ministers no longer supported planned search and rescue operations was, she said, because the government believed they created “an unintended ‘pull factor’, encouraging more migrants to attempt the dangerous sea crossing and thereby leading to more tragic and unnecessary deaths”.

To her credit, Lady Anelay was clear and unambiguous about the rationale behind the decision. People currently believed that if they attempted to reach sanctuary by sea, there was a chance they would be rescued. If the rescue cover was withdrawn, they would not be rescued. They would die. And once enough of them died, then word would finally get back to Syria and Libya that there was, in fact, no prospect of rescue. At which point people would stop trying to make that perilous sea journey. Drown a migrant to save a migrant.

He goes on to chastise individual officials for their crocodile tears and hypocrisy and ends with a fiery tirade.

The 900 did not fall victim to some tragic accident. They were murdered. Actually, they were massacred.

The policy stipulated they should be left to die. So they died.

The policy was put in place so ministers could look tough on immigration. And now ministers do look tough. Very, very tough.

Parties across the political spectrum have fought to convince the voters that they too believed Britain would be better if we could just get immigration under control. And the death of The 900 will have gone some way to convincing them our politicians are serious.