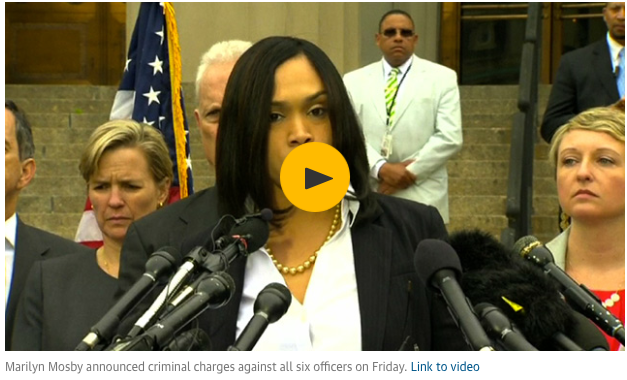 A criminal prosecution for murder will be brought over the death of Freddie Grayin Baltimore, the city’s top prosecutor announced on Friday morning.The announcement came after nearly two weeks of growing anger over Gray’s death, and only hours after state’s attorney Marilyn Mosby received the results of a police investigation.

“Mr Gray’s death was a homicide,” Mosby declared. His arrest was illegal, and his treatment in custody amounted to murder and manslaughter, she said.

Mosby said Gray sustained fatal neck injuries because he was handcuffed and shackled in the back of a police van without a seatbelt after his arrest on 12 April.

“To the people of Baltimore: I heard your call for ‘no justice no peace’,” Mosby said at a Baltimore press conference. Praising young people who had taken to the streets to protest over Gray’s death, she said: “I will seek justice on your behalf.

“This is a moment. This is your moment,” said Mosby. “Let’s ensure that we have peaceful and productive rallies that will develop structural and systemic changes for generations to come. You’re at the forefront of this cause. And as young people, our time is now.”

Whoops of joy and cries of “justice” were heard from bystanders as Mosby, a 35-year-old African American woman who has been in the job for less than six months, spoke. At an intersection in west Baltimore that has become the base for demonstrations, cars honked their horns and drivers pumped their fists in the air.

Wow. I think we got a female MLK in Baltimore.

Officer Caesar Goodson – the driver of the police van – was charged with second-degree murder, while charges including manslaughter, assault, and misconduct in public office were brought against five other officers. Goodson, who has refused to cooperate with investigators, faces up to 30 years in prison.

All six officers involved were charged. Warrants have been issued for their arrest. They are expected to be arraigned in court later on Friday.

“No one is above the law,” Mosby said.

Mosby said Gray sustained a fatal neck injury while he was handcuffed and shackled inside a police van without a seatbelt.

She said Gray’s arrest was illegal, since the knife in his pocket was not a switchblade and so was legal under Maryland law. In any case, the knife was not discovered until after he was arrested, Mosby said.