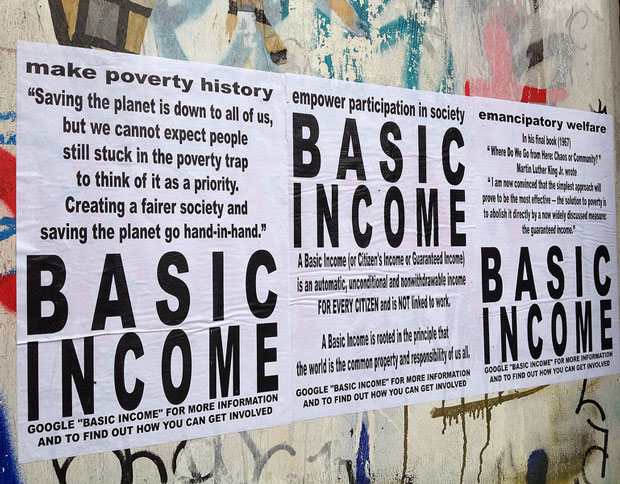 Perhaps one of the most concise and persuasive arguments I’ve ever heard in favor of a guaranteed universal basic income. It lays to rest the spurious argument that people should not get money “for free” or without doing anything productive for it. But it turns out property owners do it all the time when they charge rent or interest.

It is sometimes argued that a basic income guarantee (BIG) would be unfair because it requires no reciprocation from the recipient. Personally, I reject the principle of reciprocity, but many do not, so it might be worth briefly considering how the principle, if held, ought to be applied in the present social system. In a system of private property ownership, I would argue that the reciprocity argument against a basic income is clearly false. Would-be recipients are already reciprocating, before any such introduction of a basic income, by agreeing to go along with the private-property system. Why should individuals, especially those not born into private property, respect private property rights unless they are given something in return for their cooperation with the arrangement? It should go without saying that they are entitled to an income as reciprocation for not demanding the end to private property. If we are going to appeal to reciprocity, the onus of reciprocation should be on those who derive property income.

If there are going to be private income flows not tied to productive activity, as there always are under capitalism, they should really be the equal entitlement of all. At the very least, reciprocation should require that some of the income flowing to property owners in the form of rent, interest and profit be treated as everyone’s entitlement. These unearned entitlements, after all, are based in the system of property rights.