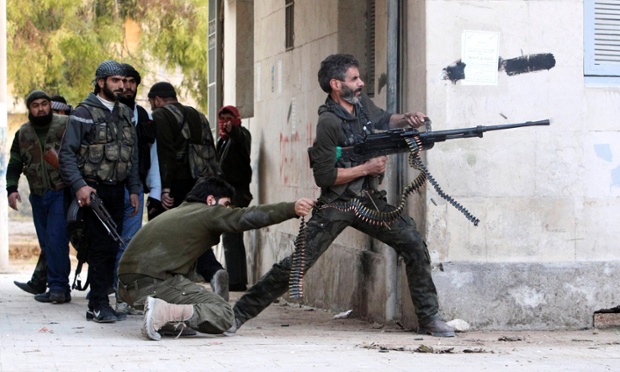 So, it’s not just US and Israel. The British are behind them as well…

The prosecution of a Swedish national accused of terrorist activities in Syria has collapsed at the Old Bailey after it became clear Britain’s security and intelligence agencies would have been deeply embarrassed had a trial gone ahead, the Guardian can reveal.

His lawyers argued that British intelligence agencies were supporting the same Syrian opposition groups as he was, and were party to a secret operation providing weapons and non-lethal help to the groups, including the Free Syrian Army.

Riel Karmy-Jones, for the crown, told the court on Monday that after reviewing the evidence it was decided there was no longer a reasonable prospect of a prosecution. “Many matters were raised we did not know at the outset,” she told the recorder of London, Nicholas Hilliard QC, who lifted all reporting restrictions and entered not guilty verdicts.

In earlier court hearings, Gildo’s defence lawyers argued he was helping the same rebel groups the British government was aiding before the emergence of the extreme Islamist group, Isis. His trial would have been an “affront to justice”, his lawyers said.

“Given that there is a reasonable basis for believing that the British were themselves involved in the supply of arms, if that’s so, it would be an utter hypocrisy to prosecute someone who has been involved in the armed resistance.”

Gildo’s defence lawyers quoted a number of press articles referring to the supply of arms to Syrian rebels, including one from the Guardian on 8 March 2013, on the west’s training of Syrian rebels in Jordan. Articles on the New York Times from 24 March and 21 June 2013, gave further details and an article in the London Review of Books from 14 April 12014, implicated MI6 in a “rat line” for the transfer of arms from Libya.