A Trucker follows his instincts, and saves a young girl being tortured like you wouldn’t believe

Parents, keep an eye on your kids. Some very deranged and depraved people out there. 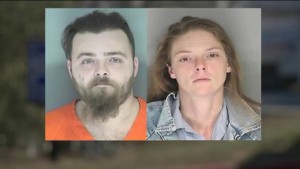 Kimmel was inside his rig, parked behind the Pilot station, when he noticed suspicious activity in an RV.

” I saw what looked like a young girl looking out the window, the black drapes didn’t make it look like a families’ RV, you know,” Kimmel said.

“I saw a guy come up and knock on the door then go inside the Pilot–then quickly came back and knocked again, all of the sudden the thing was rocking and rolling.”

Kimmel immediately called the authorities, and thank God he did.

When the police arrived, they found a young girl who was being forced into sex slavery by a couple from Iowa. She was malnourished and disheveled.

The affidavit reported the girl’s feet being punctured, nails being hammered into her, and that she even sustained severe burns from having a hot key pressed into her flesh. The key was how the traffickers branded the girl.

Kimmel is being called a hero for his actions, but he says he was just happy to help her. “When I saw the young girl’s face, I said that’s not going to happen, I’ve got daughters and granddaughters.”

It’s called empathy, integrity and sincerity. And it’s the only thing that will save humanity.