Men in Denim Built This Country – Men In Suits Destroyed It 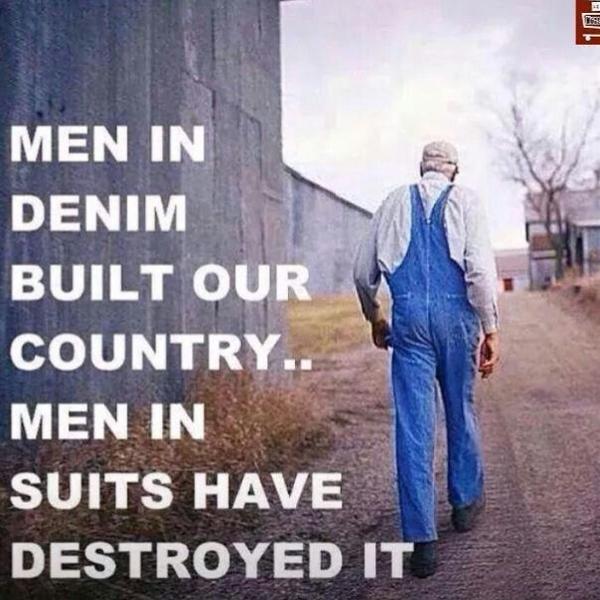 But the truth cannot be denied – houses, buildings and cities are built not by men in suits, but by men in overalls and boots.

The ones in suits may have designed them or coordinated the efforts required to build them, but the ones in boots did all the heavy lifting, often sacrificing their limbs and their lives.

Moreover, its not men in boots who plan wars and give orders to drop bombs.

There is no (good) reason on the face of this earth why the former should be entrusted with the keys to the kingdom while the latter must struggle and fight just to survive.

Only two things made this grotesquely unjust scenario possible – arrogance and lies.

The ultimate lie being that individual talents or limitations that we are born with are attributable to ourselves and not a higher power.

It’s the source of all arrogance and the main impetus behind selfishness and greed.

If we all thanked God (or the heavens, if you will) for our blessings and accepted others for who they are, then we wouldn’t have such an unjust world, obsessed with counting a handful of accomplishments, while ignoring all others, until the whole world self destructs from inequality and imbalance.

Time to give credit where credit is due, and stop assigning too much to those who don’t deserve it.