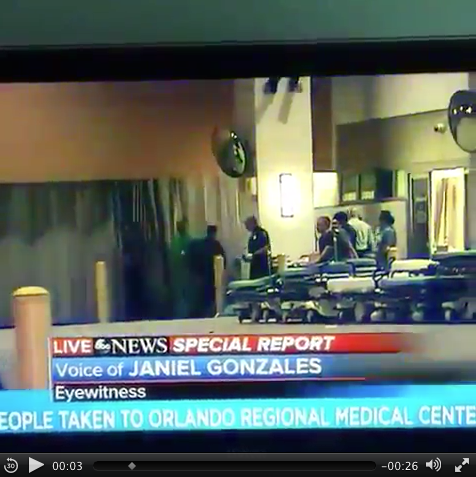 We Are Change posted a video capture of an ABC News report where one witness, Janiel Gonzales, claims someone was preventing club goers from leaving. Unfortunately, or conveniently (depending on your perspective), he was cut off before he could elaborate.

“Fifty people were trying to jump over each other trying to exit the place. There was a guy holding the door and not letting us exit. He’s like ‘Stay inside, stay inside.’ As he is saying that, the shooter keeps getting closer and closer and the sound of the bullets is getting closer. Everyone starts to panic. People are getting trampled. Let us out, let us out!’’’

Gonzalez’ first thought was that it was a hate crime. “This guy is trying to prevent us from leaving. Maybe they’re working together,’’ he said.