71% of Americans say economy is rigged 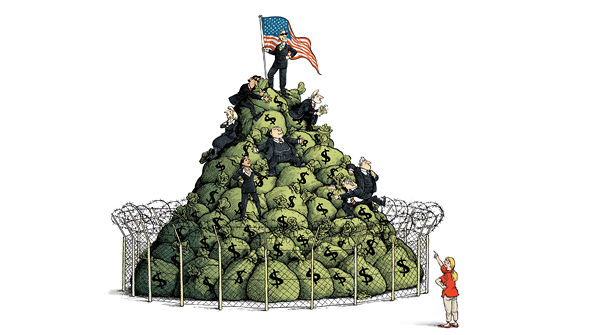 Seventy-one percent think the U.S. economic system is “rigged in favor of certain groups,” according to a new poll by Marketplace and Edison Research.

The poll asked a simple question: Which of the following comes closer to your opinion on the economic system in the U.S. People could select between three options:

1. The economic system is rigged in favor of certain groups
2. The economy system is fair to all Americans
3. Don’t know

Most selected rigged economy. It didn’t matter if the person was white, black or Hispanic or whether they identified as Republican, Democrat or Independent. The majority feel the American Dream comes with huge asterisk that reads “only for the favored few.”

The article includes a video clip of BET star Jesse Williams that went viral as an example of how contagious and pronounced the call for equality has become.

It goes on to outline so-called solutions offered by the two presumptive candidates for the upcoming presidential election that amount to nothing other than business as usual.

The mainstream media is trying to preserve its position of authority and power in a populist transformation. They see it coming and they want to be credited for it, without adding anything unique or helpful to the conversation.

Only an idiot or a hermit needs the mainstream media to tell them that the overwhelming majority of the people are disillusioned with their governments and the corporations who bought them.

The mainstream media and their pollsters haven’t told us anything we don’t already know. The writing is all over the wall. Brexit is just the beginning. The people of the world are on a roll.