An investigation has concluded Freddie Gray broke his neck after falling head-first into the back of the police van as it was moving, it was reported today.

Medical and law enforcement sources briefed on the police investigation told ABC News Gray’s ‘catastrophic’ head injuries were consistent with hitting a bolt ‘in the back door of the van’.

They claimed there was ‘no evidence’ Gray sustained a fatal spine injury during his arrest, which was caught on camera on a street side on April 12.

According to ABC’s sources, Gray was standing in the van, bent over with his hand cuffed behind his back and his head pointing towards the back door.

It is believed he fell into the door, breaking his neck.

The report that Gray fell inside the van corroborates claims he was given a ‘rough ride’ by the van driver, who is the only officer yet to deliver a statement to the investigators, according to ABC.

This map illustrates the 5 different stops (!!!) the van made prior to arriving at the precinct, including the one that was undisclosed by officers until it was revealed through a privately-owned security camera. It appears the second undisclosed stop might have been made immediately after the injury. 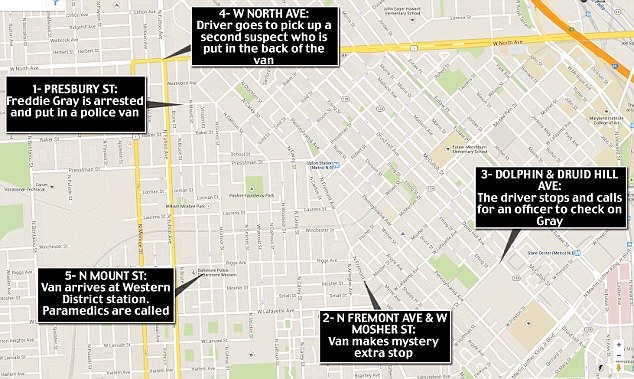 The final conclusions of this investigation have not been officially revealed, but one thing is sure, after what happened with Eric Garner and Mike Brown,  if someone isn’t held criminally accountable for this travesty, the streets of Baltimore and the nation are going to explode.