The Sorry State of Modern Journalism

This is what constitutes “journalism” today? Simplistic, ‘Yes/No’ non-questions, begging simplistic, polarizing non-answers. Leading questions like “If you don’t like Hillary, would you prefer Trump for President?” This is the modern equivalent of the classic prosecutors question; “When did you stop beating your wife?” The interviewee had to guide the interview because the interviewer is a hair net, hipster moron looking for a gotcha! 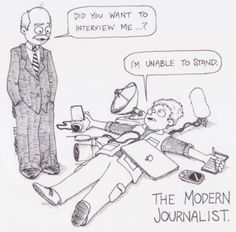 Props to Julian Assange for his relentless campaign to try and bring the truth to the people, despite the intransigence of supposed journalists like Peston, who seems to be either totally clueless or simply sticking to the MSM script. It seems that major “news” outlets have absolutely no interest, let alone commitment to actually informing the public about anything. Particularly anything that comes remotely close damaging to their interests, or exposing their perfidy.

To my mind, the most sinister part of his disclosure is that Secretary Clinton will simply not be indicted.  Despite ample evidence she has committed similar and in some cases, far more serious crimes that he, Edward Snowden and Chelsea Manning have been charged and imprisoned for, and under the same Espionage Act. Instead, her guilt will be used as a bargaining chip in the usual sordid, political horse trading that passes for public policy in the United States today.

It is by now common knowledge that President Obama pressured Attorney General Loretta Lynch to prevent the FBI from moving forward with an indictment until after the convention, and one suspects the general (s)election itself when she will be all but immune from prosecution. The oligarchy no longer even attempts to conceal their contempt for the people and the rule of law in the United States of America.

The Fifth Estate is a socio-cultural reference to groupings of outlier viewpoints in contemporary society, and is most associated with bloggers, journalists, and non-mainstream media outlets. The “Fifth” Estate extends the sequence of the three classical Estates of the Realm and the preceding Fourth Estate, essentially the mainstream press. The use of “fifth estate” dates to the 1960s counterculture, and in particular the influential The Fifth Estate, an underground newspaper first published in Detroit in 1965.

Without a truly independent, informed, inquisitive and principled Fifth Estate, the republic is finished.