Jo Cox, Labour MP for Batley and Spen, West Yorkshire was assassinated Thursday, June 16th while attending a lunch time constituency meeting at the Birstall Library in her small, tight-knit district. The courageous young Labour parliamentarian and outspoken champion of the poor, refugees and immigrants was murdered by “troubled”, 51 year old white supremacist Thomas ‘Tommy’ Mair who reportedly yelled “Britain First” over and over as he stabbed her… again, and again. After lashing out at would-be rescuers and struggling to reload his antique single shot pistol, he fired a single shot into her beautiful head at point blank range, then calmly strolled away. Mrs. Cox was pronounced dead less than hour later, at 1.48pm, leaving a grief-stricken husband Brendon, two devastated young children, a profoundly shocked nation and, one would hope the entire formally civilized world.

According to her official parliamentary bio page, “Jo grew up in Batley and Spen, attended Heckmondwike Grammar School and became the first in her family to graduate from university finishing her degree at Cambridge University in 1995.” Jo worked tirelessly not only on behalf of her immediate constituents, but was deeply involved and committed to the issues confronting the poor and dispossessed around the world through organizations like Oxfam and Save The Children. She was also national chair of Labour Women’s Network and senior advisor to the Freedom Fund dedicated to the abolition of Slavery.

By now, the knee-jerk narrative of “loner”, “troubled man with a history of mental health problems” habitually trotted out by the main stream media when white men stand accused of heinous acts of terror, has become as familiar as it is sickening. We all know he would have been immediately denounced as an Islamic Terrorist with the usual hand wringing and ad hominem attacks on the diverse and overwhelmingly peaceful Islamic religion and culture if his name had been ‘Mohammed’, or even vaguely foreign. It’s unclear at this time whether “Britain First” was simply an expression of personal sentiment, or the rallying cry of an actual Nazi terrorist organization. The latest news seems to suggest the latter and that this is the focus of the full-scale investigation, currently underway. Nazi regalia, propaganda and memorabilia were found at the home of Mr. Mair, whom according to The Guardian, wasn’t your average, red blooded, white supremacist, ‘Lager Lout’ out on a lark. He had read the announcement for her weekly “surgery” as it was ironically called, and lay in wait for her. Given his association with known Neo-Nazi organizations and sentiments, to suggest that he acted alone is not only irresponsible. It’s wrong. Dead wrong.  This dedicated public servant was not killed by a “lone wolf” or single deranged hooligan. She was murdered by a highly organized and effective media campaign of toxic, xenophobic nationalism waged by the global elite to manufacture consent and support for a new world conflict, and modern day “Final Solution” to the largest refugee crisis and humanitarian catastrophe since the second world war.

A crisis deliberately caused by the United States of Americas’ invasions of Iraq, Libya and now Syria, and cynically manipulated by their water boys in Great Britain, Canada and other members of the NATO criminal conspiracy. Rabid, nativist fascism is back with a vengeance, wrapped in the Union Jack and blaring from every available outlet of a compromised and complicit media. In Britain and across Europe, the rise of Neo-liberal, proto-fascist parties is accompanied by the daily, drum beat of hatred and bigotry in the tabloid press that many in the public obediently rebleat to each other around the water hole. The Prime Minister himself questioned the allegience of the new Mayor of London, Sidiq Khan. While across the pond in the United States, Trump and Clinton form the Republican and Democrat wings of the old Iron Eagle fanning the flames of xenophobic nationalist hatred, with a fresh, new marketing campaign.

In Israel, Likud embodies all the essential elements of a Nazi state complete with racial purity laws and arbitrary detention and execution. As Thomas G. Clark of Another Angry Voice alludes in his excellent piece “The Assassination of Jo Cox MP“, Israel is extremely nervous about the potential of a dedicated foe such as Ms Cox in the halls of Westminster. Given her articulate and highly effective support of the BDS movement, and Israels’ record of relentlessly hounding anyone they deem a threat, it would not be out of bounds to suggest any investigation follow the money, so to speak. 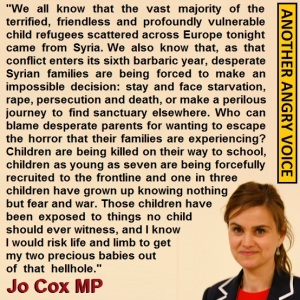 Equally important to the understanding of who / what killed Ms. Cox and why, is to unpack and internalize her message. To me, that message is simple and devastatingly clear: These innocent children will be radicalized by the unimaginable trauma of death and destruction they have witnessed and suffered through. One day soon, they will desire and seek revenge. This is what our elites want. They will form the terrorist cadre that keeps our military industrial complex in business. And business is booming! This is perhaps the most heinous and cynical marketing plan ever devised. Specifically designed to create an endless stream of “enemies” to demonize and obliterate.

The west is fast becoming a kind of open-air lunatic asylum and grievance mall where you can select your preferred target from the glossy, MSM catalogue of enemies of all you hold sacred, purchase your weapon of choice and BANG! (RAT A TAT TAT at 13.3 rps in the States).  Take out all you’re frustrations, anger, hate and helpless rage on a complete stranger on the street. Unless this corrosive narrative is changed, and we extend basic human decency and compassion to these victims of our colonial wars, we risk being overrun by billions of desperate and legitimately angry human beings who quite rightly see us as amoral monsters.